A BIG wave surfer from Hawaii was killed surfing a huge swell at Maverick’s – the legendary California surf spot that took the life of another Hawaiian surf star, Mark Foo, 16 years ago, the Santa Cruz Sentinel reported today. 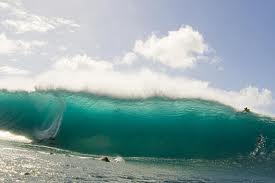 Sion Milosky, 35, appeared to have drowned while riding in high surf off the coast near Half Moon Bay, south of San Francisco, according to fellow surfers.

They said Milosky fell when the lip of a wave collapsed on top of him and was held under by the force of several huge waves that followed. The San Mateo County Coroner’s Office has not determined a cause of death.

According to the Santa Cruz Sentinel, the wave faces at Maverick’s on Wednesday were topping out at about 60 feet (18m). One of the world’s biggest breaks, waves at Maverick’s have been seen as high as 80 feet (24m).

An experienced and accomplished big wave rider from Kauai, Milosky was wearing a flotation device that did not save his life. Another surfer, Nathan Fletcher, went looking for Milosky on a Jet Ski when he did not surface after his fall. Fletcher found his body 20 minutes later about a mile (1.6km) from the surf.

Married father-of-two Milosky was recently named North Shore Underground Surfer of the Year. He had been featured in surfing magazines and was known among surfers for paddling into what many believe is the biggest wave ever seen, at Phantoms, Oahu.