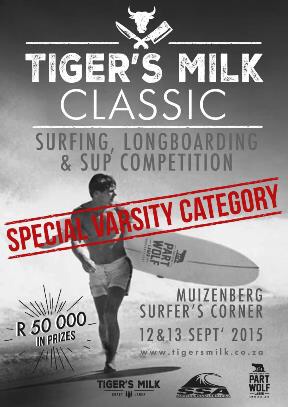 The tough onshore conditions and a large swell predicted for this weekend’s Tigers Milk Surf Classic is sure to favour the Muizenberg locals competing in this unique multi discipline surfing event and it will come as no surprise if they dominate the results.

In the Men’s surfing division fourth seed Reza de Nicker leads the locals charge at the R5000 prize purse and PST points. He will be challenged by recent SA Champs bronze medal winner Craig Johnson who is seeded sixth in this division while SA Champs Under 20 Division finalist Brandon Benjamin, a Surfers Corner regular, is seeded seventh.

In the Women’s surfing division multi capped provincial and national team member Tarry Chudleigh grew up surfing the Corner and it will be no surprise to see the second seed in the final come Sunday. Another surfer with total local knowledge is Danielle Johnson who although only seeded sixth in this contest surfs the contest area pretty much every day and must be in the mix for a berth in the Final.

Double World Longboard Champion Matthew Moir stood up on a wave for the very first time at Muizenberg Corner some thirty years ago and has honed his skills as one of the world’s best longboard surfers thanks to his ability to surf difficult “berg surf. It will take a lot to beat him over the weekend but according to another local, Kwezi Quika, nothing is impossible.

Kommetjie based Women’s World Longboard Champion Simone Robb honed her skills in the rough and tumble that is Muizenberg and she, along with Jessie Marjaan Goodman and seven time SA Champion Kay Holt will be the locals to watch in this division at the weekend.

Local businesswoman Roxy Davis is the stand out local in the Women’s SUP division. She will be representing South Africa at the next ISA World SUP Championships but this talented waterwoman would have been a standout in the surfing or longboard divisions had she decided to compete in either of them. Davis has national colours in all three disciplines.

Justin Bing, a national longboard and national SUP representative, has been based in Durban for about a year but the Corner is a surfspot that has helped him achieve a number of milestones so he is by default, a local. He has the strongest pedigree in the Men’s sup Division but he will have to keep an eye on young Dylan Frick who has just returned from competing in Japan and has a point to prove..

The judges will be adjudicating the event from behind the glass windows of the restaurant which overlooks the contest area and a monitor will be installed in Tigers Milk on both days which will show the live scoring in each and every heat
.
The 2015 Tigers Milk Surf Classic is the major tournament to take place at Muizenberg Corner in thirty years. It is also the first multidiscipline event to be held at this venue and offers a total of R50000 in prizemoney and prizes across the six divisions.

The contest is scheduled to kick off at 8am on both Saturday and Sunday and Tigers Milk will be open for breakfast from 8am on both days. The prizegiving will take place inside the restaurant immediately after the last final on Sunday September 13th.

As safety is paramount in a big event such as this and because September sees an increase in offshore shark activity along the False Bay Coast and Surfing South Africa has engaged the services of the Shark Spotters for the duration of the event.

The heats and provisional contest schedule for the 2015 Tigers Milk Surf Classic are posted on www.surfingsouthafrica.co.za